I recently received a pissy email from someone who apparently thinks it’s my job or something to review games and was appalled that I didn’t offer anything beyond quick impressions after my vast 10 minute experience dabbling in the Devil May Cry IV.

Devil May Cry IV is going to feel the same for followers of the series, control-wise. However, if you’re new to it – it’s along the lines of a game like Ninja Gaiden Sigma. You have sword repertoires you can learn, abilities you can boost – by picking up colored orbs left by dead enemies. The DMC series has always been — and DMC IV does not deviate — a lot of very fun hack and slash with a smidge of role-playing game mixed in and maybe one or two puzzles reminiscent of Resident Evil.

There is one issue to get to first — game installation. It takes 22 minutes on the PS3 for DMC IV to install 5 gigs of game data. Is this worth it? YES. The load times for DMC IV are some of the quickest I’ve ever seen on any PS console, any game…but the installation is guaranteed to annoy you.

DMC IV sets you up as…a guy named Nero, not Dante (at first), who doesn’t have the familiar “Devil Trigger” that pops up with Dante after taking enough damage, the one that turns him into an unstoppable force for a few seconds. To replace that, you’ve got a devil “arm” capable of delivering huge blows for Nero, big pile-driver smackdowns, grabbing enemies, and navigating certain areas. 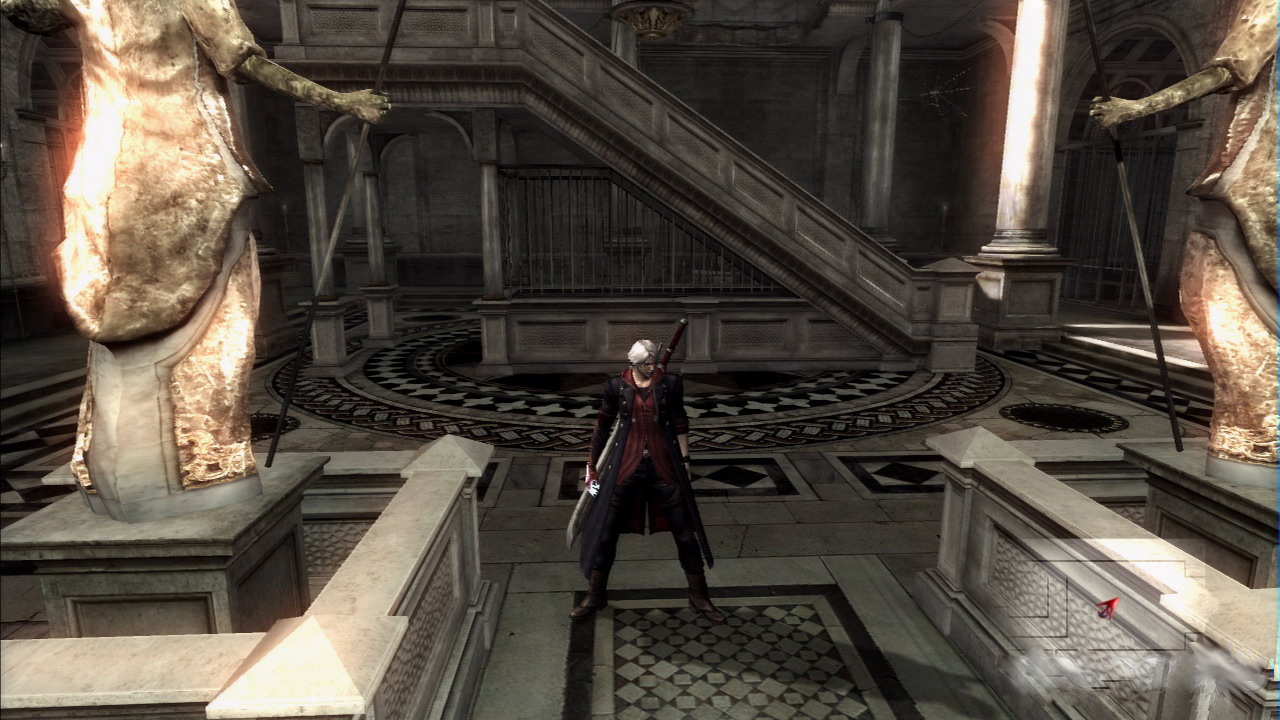 Nero and his demon arm (click for larger image).
Note — for a full gallery of screenshots, go right here.
As I mentioned, as you proceed through the game, you will power up your skills and abilities with your weapons and in-general. For instance, it costs a good deal to get “air hike” – for non-DMCers, that’s like a triple kick in the air (you kick off of air once).

The graphics for DMC IV are very, very good-looking for a 3rd-person shooter. The settings are designed well, the characters move in convincing ways, and there are no real bugs – except for camera malaise. Parts of DMC IV allow a free-roving camera view, others lock you down into one particular camera view, making it difficult sometimes to deal with multiple threats coming from two or more locations at once.

The combat engine is well-done, as usual, and contains nothing that new, really – well, new moves, same idea. The more “stylish” and varied your attacks against your opponent are without letting yourself get hit, the higher your orb modifier goes up, meaning, kill with style and you’ll get more orbs, which in turn power you up further or allow you to buy items.

And don’t worry – you get to play Dante eventually.

DMC IV also allows the Capcom tradition, mentioned above, of replaying parts (or the entire) game as another character – once unlocked. Like many recent FPSers (although DMC IV is a true 3rd person slasher/shooter), it also has a system of rewards and badges you win (say, for killing 100 demons in a row).

Did I mention a story? No. There really isn’t much of a story here, I’m afraid. I mean, yeah, it’s there, but it’s weak compared to every other aspect of the game. The voice acting in the game is also a weak point, not really helped by the fact that this is a game really geared for a Japanese market first — Japan loves the weird demons (DMC) and the U.S. loves the zombies (Resident Evil). But if even some of the look of this game spills over onto Resident Evil 5 — we’re looking at a really great RE coming up.

To sum up, after playing it for a good amount of time now, I will re-grade (based on a scale of 10, which is pretty damn obvious) the two most important factors for me in a game:

Graphics: 9 (it’s PS3 eye candy; I can’t speak for the 360 version)
Gameplay: 8 (could be higher but it’s repetitive at points and the sometimes-fixed camera makes fighting difficult in certain areas)

That’s all I’m going to throw out there, plus the above admittedly short review. Again, there is the replay value for those who want to buy (although, in my humble opinion, shelling out $20 more for the “Collector’s Edition” is insane).

DMC IV is a good, solid game, and perhaps the best in the franchise in terms of gameplay, and most definitely way up there on the eye-candy scale (barring the annoying fixed-camera moments).

In addition, DMC IV comes with rumble support (works fine with the rumble controller I have; rumble is a little less energetic overall, though, I’ve found)