Split/Second: Velocity Review for the PC

Adding the “Velocity” to the originally named Split/Second title is sort of redundant. Let’s get that out of the way. It’s like Rockstar naming something “Grand Theft Auto: Shoot People”.

This is quite a fun racing game. However, you’re really going to want a controller for it — I use a Logitech Rumblepad 2, because of its almost exact duplication of a PS3 controller. Racing with the keyboard is just going to piss you off. 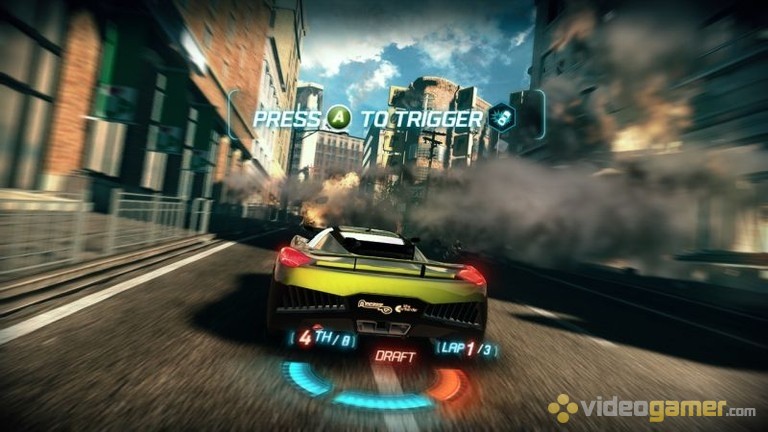 The racing is a bit pedestrian, but okay. The selection of tracks is somewhat limited and you’ll be revisiting the same track more than once.

That being said, the gimmick to this game is what makes it really fun. The goal is to fill up a meter by drifting, drafting, etc., in order to release “power plays”. You can fill the meter a little bit and unload one smaller power play, or you can fill it all the way up and trigger a “Level 2” powerplay.

Powerplays involve blowing up part of the landscape so it falls on other drivers and wrecks them (knocking them way out of their position). Of course, you can accidentally trigger a power play on yourself, which is a bit annoying. But the key here is that you get to blow stuff up. Blow stuff up good. Blow more stuff up using the Level 2 powerplay. Lather, rinse, repeat.

There’s not much else here, I’m afraid. You do get to do some “route changes” by blowing stuff up — opening up alternate routes for you to take in the game — but basically it’s just a racing game with a blow-stuff-up gimmick. However, it’s well executed, runs without a hitch on my machine (a few crashes until I updated my drivers, so make sure you update your drivers), and is actually pretty fun.