I’m not going to spend a lot of time explaining how Tiger works in general, because I have to get to this year’s changes, but to sum up: You use an analog stick to “swing” at the ball, you can supplement that swing with a power boost by  tapping L1 or X; you putt by reading the break of the green, represented as a grid, on your screen. It’s really not a very complicated game.

But they’ve made it a little more complicated this year, which is what I’m going to talk about. They’ve added three things: Focus, XP, and “True Aim”.

Focus makes the game more realistic. You start out a given round of golf or skills challenge with a certain amount of focus. Focus is used up when you power boost, when you increase accuracy, or (significantly), when you use the putt preview feature to see where you putt would go based on your current aiming point on the green.

The only way to gain back focus is to make a shot without using it. This means that this year you’re not going to be blasting the ball off the tee every single time, because you’re going to want to save that focus up for reading putts, gaining accuracy on your approach shots, and so on.

Focus is the main thing that makes Tiger Woods ’11 more realistic, but a close second is True Aim. If you choose to play in this mode, you’re doing a lot more to make your game like real life. True Aim takes away the aiming circles, putt preview, and so on. You cannot watch your ball in flight or see where it lands on long drives; you just have to hope you picked the right club and you’re in the right place. You do get an overhead “GPS” view, but there are no aiming circles, merely yardage markers.

The third big change to the game is the introduction of XP, which any gamer knows means “experience points”. This is how you will level up your golfer. Each skill has a subset of skills underneath it that you will fill up using XP gained when you play — XP that can be picked up by beating challenges, or by reaching fairways and greens in regulation, making long puts, and so on. It’s much more detailed than the previous Tiger methods of leveling up your golfer. However, you do still unlock items in the Pro Shop that have stat boosts on them. 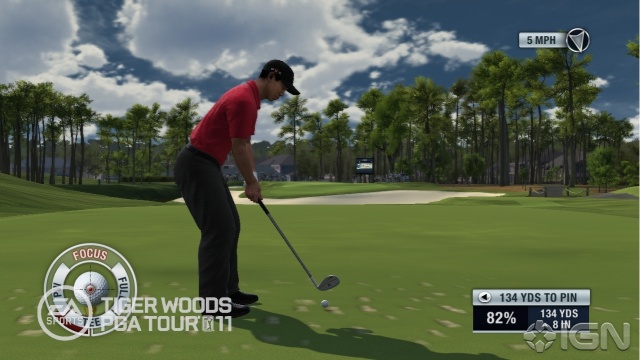 That’s about all there is to this year’s Tiger (oh, and if you’re looking for the Tiger Challenge, you’ll find that it’s been replaced by a “skills” challenge — and interestingly enough, Tiger does not set himself up to be the ultimate golfer you have to beat this year — let’s hear it for some humility). Pretty much everything else is the same as it’s always been — which it shouldn’t be. The graphics are still very nicely done, but we’re talking PS2-level graphics on a next-gen game, which is somewhat annoying. Every year I hope they’ll improve the graphics, and every year I’m let down.

Probably the best thing about Tiger is the online gaming modes. New this year is a gaming mode in which twelve golfers face off against another twelve golfers; a battle royale. Tiger is still one of the most fun games to play online; even, in my humble opinion, more fun than Madden online.