Well, about a month or two ago I participated in the Star Trek Online open beta, and when it ended, I liked the game so much I decided to sign up and play it.

If you’re a Star Trek fan, this game is for you. Star Trek Online takes place after the events of the latest movie (not back in time, but in the future, after Romulus has been destroyed). The Federation is back at war with the Klingons, and, as you find out during the progress of the game, Species 8472 (the “Undine”) are also busily trying to wreak havoc on the good old’ Federation.

Star Trek Online is an MMORPG — a “massive multiplayer online role-playing game”. Like any role-playing game, you progress through levels. There are ranks and sub-ranks, so you can be a “Lieutenant Commander 6” (which I currently am).

One of the great beauties of STO is that it merges ground “away” missions with space-based combat. On the away missions, you’ll find yourself confronted by hordes of enemies, and you, along with your bridge officers, will have to dispatch them and take care of your various missions. The scenery is quite pretty, although not as beautiful as, say, Lord of the Rings Online.

Space-baced combat, though is where STO really shines. You can choose (once you get past your “starter” ship) either an Escort, Cruiser, or Science Vessel. Each has their advantages and disadvantages. Cruisers are the classic “Enterprise”-style ships, and you probably won’t feel complete without at least once piloting a Constitution-class Cruiser (the original Enterprise design).

In space, you steer your vessel with your keyboard, or — and this is much easier — by holding both mouse buttons down and moving the mouse in the direction you want to go. You have fore weapons, you have aft weapons, you have phasers, you have disruptors, you have torpedoes, you have mines — you have a bevy of weapons at your disposal, is what I’m trying to say. 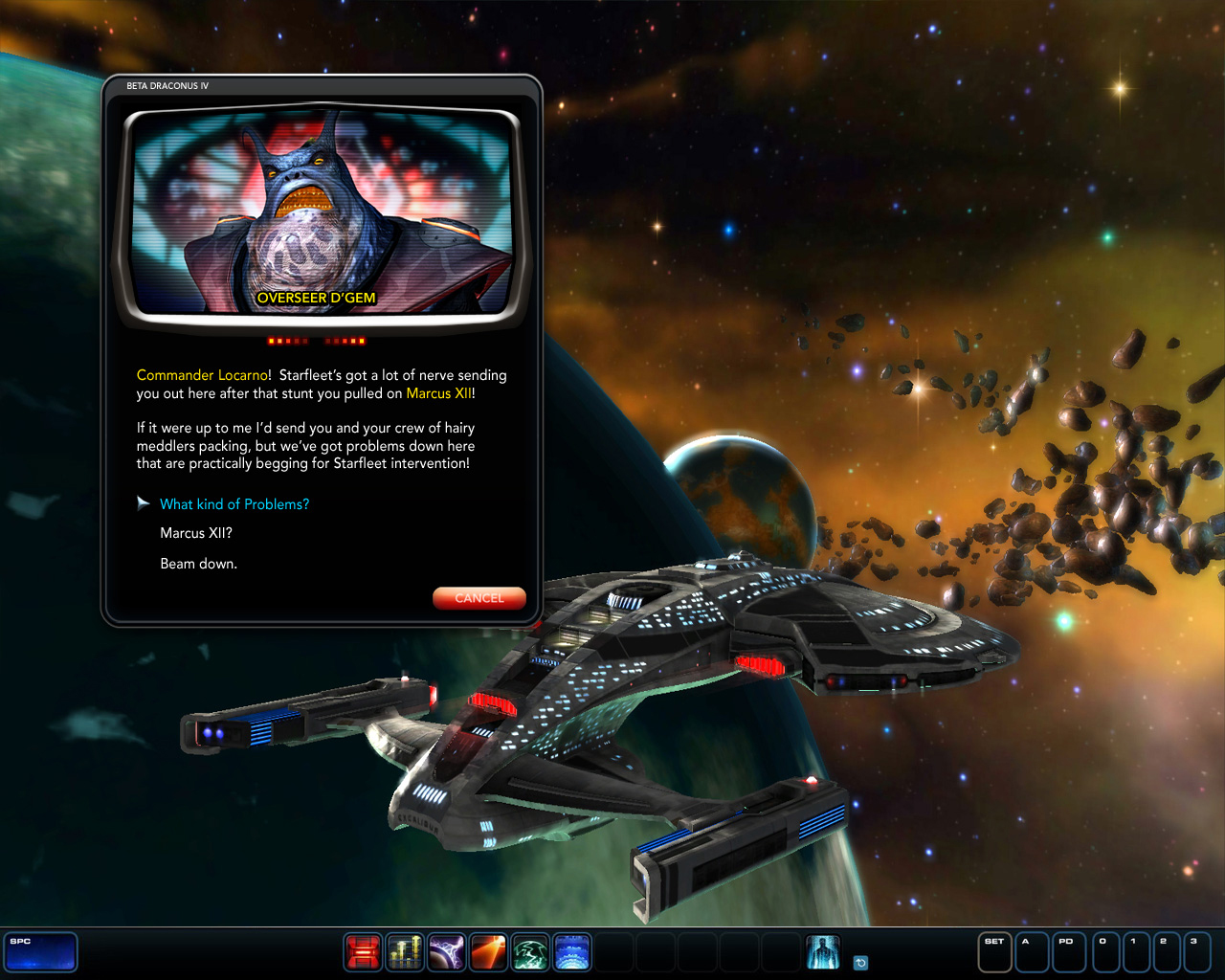 Space, the final frontier…(click to enlarge)

And the space combat is intensely beautiful. Phasers shoot out like glittering beams, ships curve away leaving trippy trails of light behind them; damage shows on your ship as your hull is relentlessly assaulted by those damned Klingons and Romulans and…BORG! (the tutorial, God bless it, features the Borg).

Another great thing about the space combat is how smooth it is. I’ve seen fleet battles with fifty ships or more attacking another fifty ships and the system doesn’t even hiccup (admittedly, I am running a very powerful computer, though). It does, however, at times, get a little repetitive, but all MMOs have that problem.

One fun aspect of the game is recruiting your own team of Bridge Officers, each with their own unique land and space-based skill sets. You’ll use different Bridge Officers for different things, and it adds a lot of flexibility and depth to the game. Plus, it’s just fun to have your own “team” to boss around, even if you play solo.

Money is handled in “energy credits”, although you won’t find a heck of a lot of use for it. They’ve done a good job keeping the importance of money down, which, as any good Star Trek fan knows, fits with the Star Trek ethos: money has been eliminated in the future.

Crafting takes place at Memory Alpha, and it’s one of the areas where the game could use a little work. You go around scanning anomalies in space and on the ground to collect mineral samples, data samples, and such, and you turn them in at Memory Alpha for upgraded weapons and items. It takes a lot of crafting work to move beyond the initial limited selection of items.

There are exploration missions which reward you with upgraded weapons, good old patrol missions, and special missions handed out by a cavalcade of different characters, many of whom you’ll recognize from the Star Trek universe, or who are related to someone in that universe.

Besides crafting, one other area where the game suffers some problems is in the social networking area. Chat is muddled, the chat window is too small; chat is confusing, hard to understand, and hard to be heard on. Of course, they’ll probably patch that up eventually, but right now it needs some work.

You can form your own “Fleet”, another name for Guild/Clan on other MMOs. I belong to StarFleetGuild (shameless plug here), and my main character’s name is T’Kyp, although you can reach me at any of the “@Kipstah” addresses. Which reminds me, you can play Federation or Klingon, and even a freed Borg, although playing a freed Borg requires a lifetime subscription (around $250 or so). You can also select from a variety of different races, Vulcan and Human being the most common.

Pricing is pretty standard: about $15 a month, with small breaks given the longer length a package you buy.

More information can be found at: http://www.startrekonline.com.

I’m giving this game an 8.75 out of 10. There’s room for some improvement, and it needs some missions added, as well. But that can be taken care of with patches and expansions packs.

This entry was posted in science fiction, videogames. Bookmark the permalink.