Well, first let me say HAH to all the Xbotch users out there: Final Fantasy XIII is one Blu-ray disc for the PS3, but apparently three discs for the Xbox.

Enough gloating. Let’s get down to the basics. First, the story. FF XIII is set in the world of Pulse, a dangerous underworld, with a floating Eden-like human city above it named Cocoon. There’s trouble in River City, though — they’re deporting undesirables from Cocoon down to Pulse. Or, at least the authorities say they are. They’re actually killing off people, not just sending them down to Pulse.

Which is where you enter. You start out playing two characters, Lightning and Snow. Lightning is a soldier who takes up arms against her own forces; Snow is the leader of an underground rebellion. You go on to play, I believe, four other characters, totaling six characters in all that you control.

The rest of it you should pretty much discover on your own. There are, of course, Chocobos. No Final Fantasy would be complete without Chocobos.

Down to the nitty-gritties. The graphics are, as always, incredibly beautiful. Final Fantasy has always been pure eye candy, and the thirteenth installment doesn’t disappoint. It runs in full 1080p as well, if you have a 1080p set. The spiky-haired anime heroes remain true to form, which will delight many of you.

Gameplay is a little different. The ATB (“Active Time Battle) gauge makes a return, meaning you’re fighting in real-time, but the combat system has been dumbed down so that most of the time you’re simply choosing a command called “Auto-Attack”. 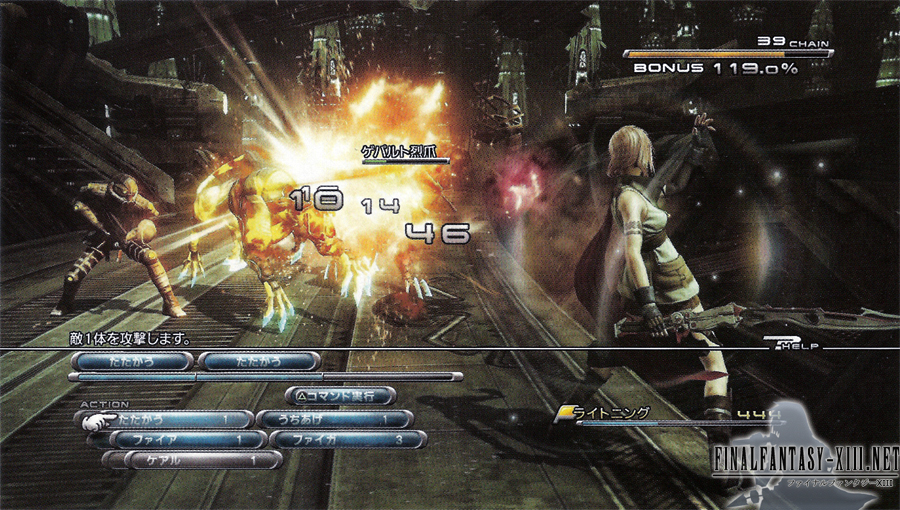 Turning Japanese, I really think so…

Skills are managed through something called The Crystarium, which should come as no surprise to any fan of the franchise. As usual, it’s complex and rewarding and takes hours and hours of gameplay to actually get anything done.

They’ve done a good job with the first Final Fantasy for next-gen consoles, they really have. Admittedly, this review is somewhat brief, because I haven’t gotten that far in the game yet, but I wanted to post a review with my initial thoughts as fast as I could. I may post some updates to the review in the upcoming days.

**UPDATE** — Final Fantasy XIII is a lot like MGS IV — you get about ten minutes of battle and then a half hour cutscene. This does detract from gameplay slightly.
**UPDATE** — Though you no longer can control your secondary characters, you assign them “roles” — Synergist, Medic, Commando — train them in these roles in the Crystarium, and “Paradigm”-shift into different groups of roles.
**UPDATE** — Don’t sell your components early in the game for cheap Gil. They can be used to upgrade your weapons and items further on in the game.